Burning the midnight oil pays off

A SOWETO mother has increased her sales by about 300% after transforming a humble homebased car oil business JGL motor spares into a “well-oiled machine”.

For a decade Bridgette Radebe (no relation to the businesswoman by the same name married to Patrice Motsepe) battled unemployment, but she held onto a reoccurring dream — to establish a better life for herself and her family through entrepreneurship and oil.

“While I was unemployed from 2002 and taking refuge at a local church, St Alley, a strange dream came to me which showed me that this would be the solution to my life’s challenges. Initially, I tried a small business selling vegetables which was not profitable,” she explains.

Then in 2011 she decided to start an oil retail business. She already knew her biggest challenge was her limited access to information.

“I tried approaching vehicle spares retailers in other neighbouring communities, but most refused to share any information on suppliers and insisted I source my products from them.

“It was only after my sister, who has access to the internet, offered to assist that I got somewhere. She found the contact details of Castrol (oil) who then set me on the path with SA Lubes — the lubricant giant’s distribution partner.”

Soon thereafter she launched JGL motor spares in 2012 and started selling vehicle lubricants from her home — ideally located on a main taxi route in the area of Braamfischerville. SA Lubes became an integral part in her road to success. The company not only helped provide her with a formal kiosk from which she could sell her products, but also advised her on which products and quantities to stock.

“They also assisted me through their delivery service as initially I transported my first consignment using public transport. I also received training on all the specs of the products, so I (now) understand which products work best for which car and can advise my customers accordingly.”

In the first year when Radebe started out she sold just 40 units of a single product packaged in a 500m1 can. Now she averages about 100 units in a week as well as about 25 of the 51 bottles, while offering the full range of Castrol products. Although the assistance from Castrol drove her business forward, it’s been her hard work and quality service that have brought her success.

“I’m not afraid of hard work and willing to work all hours of the day. Some taxi owners knock on my door as early as 4am.”

The 50-year-old businesswoman, who grew up in Meadowlands in Soweto, says she always knew she wanted to run her own business after seeing her father run a mobile movies business. While her dream has now been realised, she still has goals for her future.

“I wish to become a successful businesswoman with an established motor spares business which can have a lasting legacy for my family and community. As a very spiritual woman it is very important for me to help my community and those in need as part of my own growth.”

And she does just that. As she gains knowledge and experience, she passes it on to other aspiring entrepreneurs. 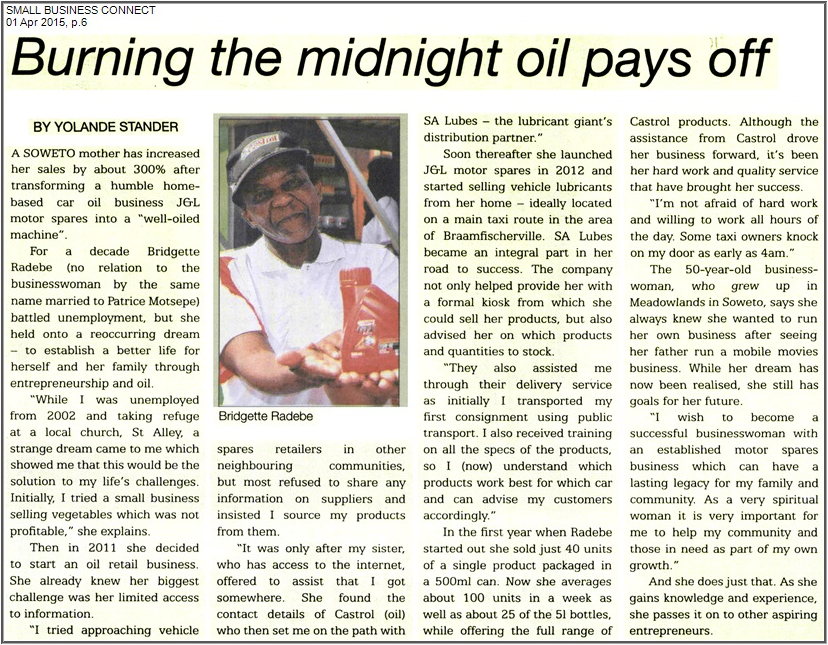